Well keep scrollin’ cause we have some sneaky behind the scenes snaps just for you! Behind the gloss, there’s the real story of just what it takes to put a shoot as special as this one together – and trust me, this one had it all… hysterical laughter, panic stations, emergency room visits, torrential rain and a camaraderie that’s hard to beat.

So many cushions! Jules and Jem doing their best tszuj-ing

While our last shoot was big (i.e. renovating our home in one week The Block style in preparation for a four-day shoot the next), this one felt even BIGGER. Which, if you’d asked us if that’s even possible after our last Terra Collection, you would have been met with an adamant, “No!”. But, just like childbirth, the mind (and body) forgets and so we didn’t just go in hard, we raised the bar to a place we didn’t think we could even go. In shoot world, it was like birthing triplets.

Shot from outside of Raes, Byron Bay.

A rare girls trip away late last year saw Pheebs and Julia Green, from Greenhouse Interiors, sipping coffee at Raes. Both gobsmacked by the architecture and vibe of the hotel, reminiscent of Morocco and the Mediterranean, it was pretty much decided then and there that the SS19/20 collection would be inspired by this beautiful place. So naturally, we also immediately decided it had to be shot there too!

Whitewashed walls, arched entrances, freakin’ stunning tiles EVERYWHERE, artistic wall murals and a beautiful poolside paradise oozing with European holiday charm. The place is otherworldly and will definitely cure all of those wanderlust cravings without the 24 hour hellish journey to get there!

So, fast forward to late June and a red-eye flight for Pheebs to meet our friendly TNT delivery driver at our Airbnb, with a whopping 24 boxes of stock mind you. And did we mention the flight of stairs, that Pheebs was on her lonesome and some of those boxes alone weighed just shy of her total body weight?

After the whole “box situation” was sorted and the new collection was locked away, Pheebs cruised back down the Pacific Highway and picked up the crew in her newly hired mini van. In fact, she became *so* well aquatinted with Ballina airport that the “friendly” parking attendant announced over loud speaker that the mini van parked illegally would have its tyres slashed if it wasn’t moved quick smart. Ah, don’t you love getting out of the city, where people just say it how it is?! Honestly.

With the whole team collected safe n’ sound, we were ready to start shooting Soleil. 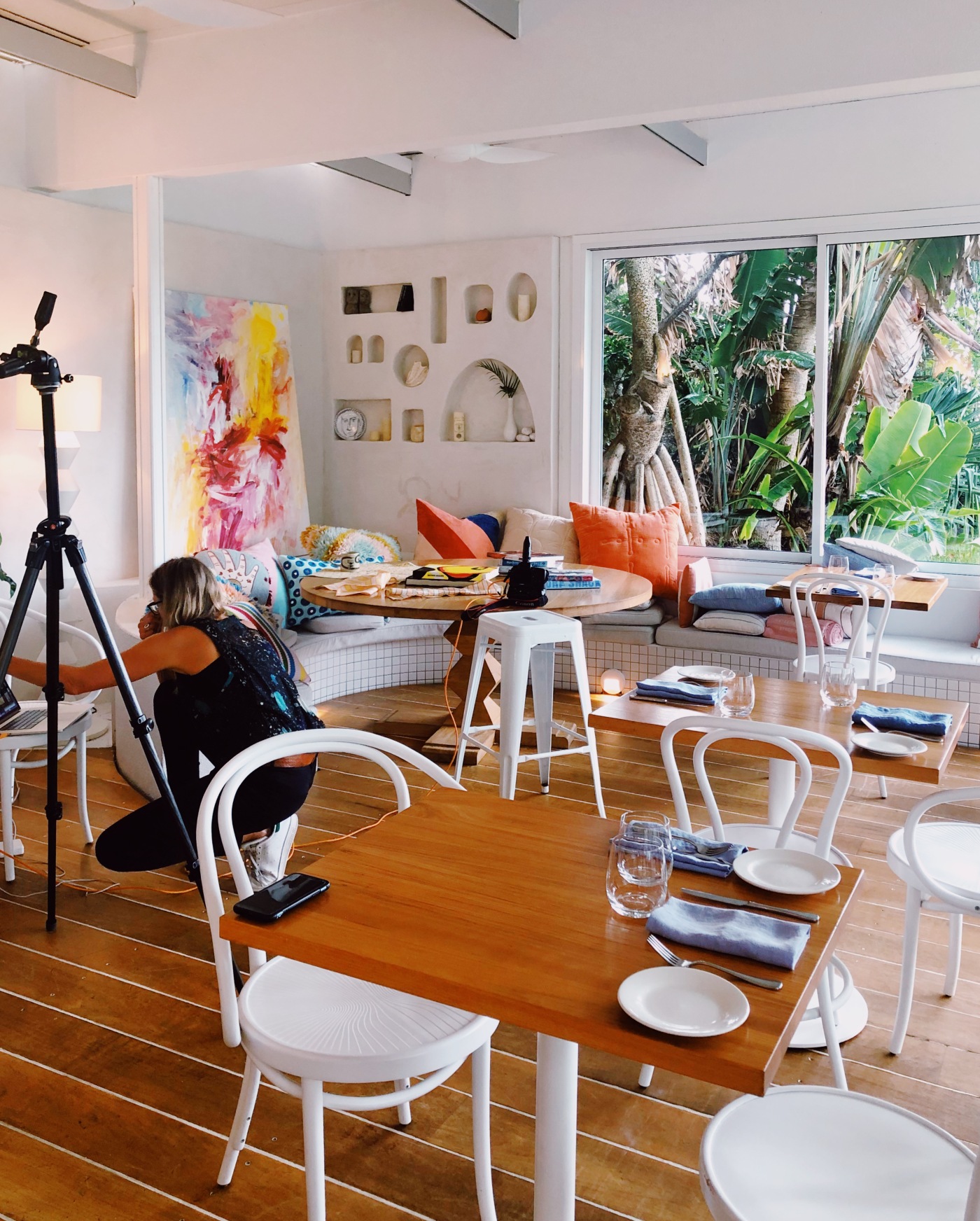 Armelle, our Photographer, shooting our new napery and cushions in the dining area at Raes. 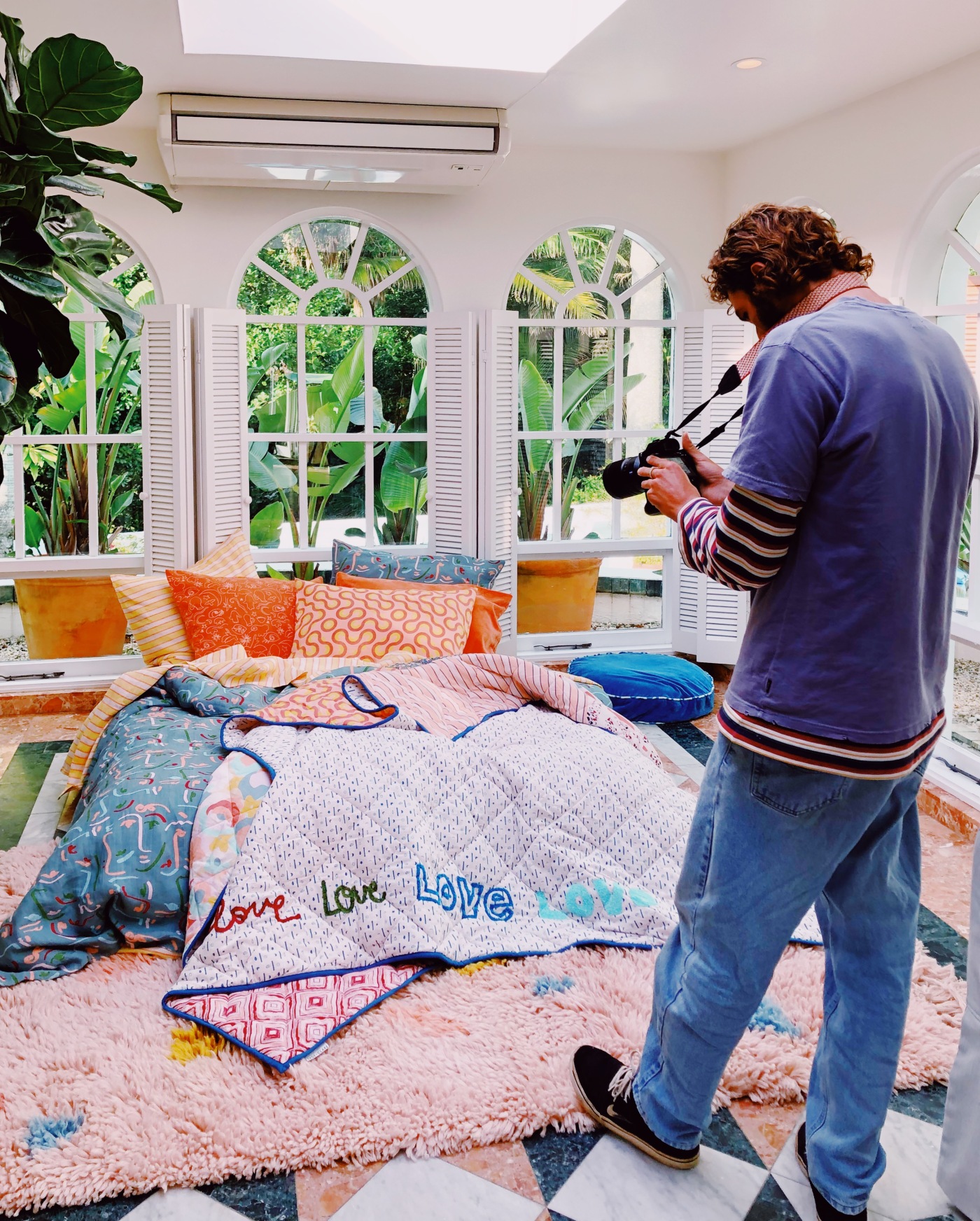 It was shot mid-winter in the beautiful (but NOT sunny or warm) Byron Bay! I know our pictures tell a different story, but in case you missed the latest Vanity Fair article on the Byron influencer set, the place does a bloody marvellous job of making everything look pretty magical and sunny, all. of. the. time!

Morning one started with a downpour that the locals hadn’t seen in weeks apparently. Perfect. But we ain’t no fair-weather shoot crew! We also collected some new friends along the way – Dom, our videographer, who is about as chill as a high quality deep freezer (in the best possible way) and his equally chill friend Mack… who also became Dom, when Dom wasn’t around b’cos too many names

We started using words like “gnarly” and “hang ten” with them and being the absolute legends they are, they played along. They also helped with everything from “HEY DOM, Do you know how to get keys out of our locked van?” And  “HEY DOM, do you know where we can source some nice hats?”

Another cheeky shot of Dom, shooting Pheebs and Armelle.

Fairy floss skies. Sunset from the balcony at Raes.

Now, we could have just made it easy and stuck to shooting in the one room for all four days, but why would you do that when all seven suites are as exquisite as the next? We narrowed it down to three and imagined ourselves on a personalised tour of Raes. What we didn’t properly consider is that we literally had to check-in, UNPACK, shoot, PACK UP, sleep, check out and check-in, again. 3 DAYS IN A ROW! And don’t forget, we’re not just talking about an overnight bag… we’re talking those plus the entire Soleil range plus photography gear. Give me an E, give me a P, give me an I, give me a C!

What we will say though is every single room fulfilled *every* corner of our highly luxurious imaginations. Seriously. Possibly even surpassed. 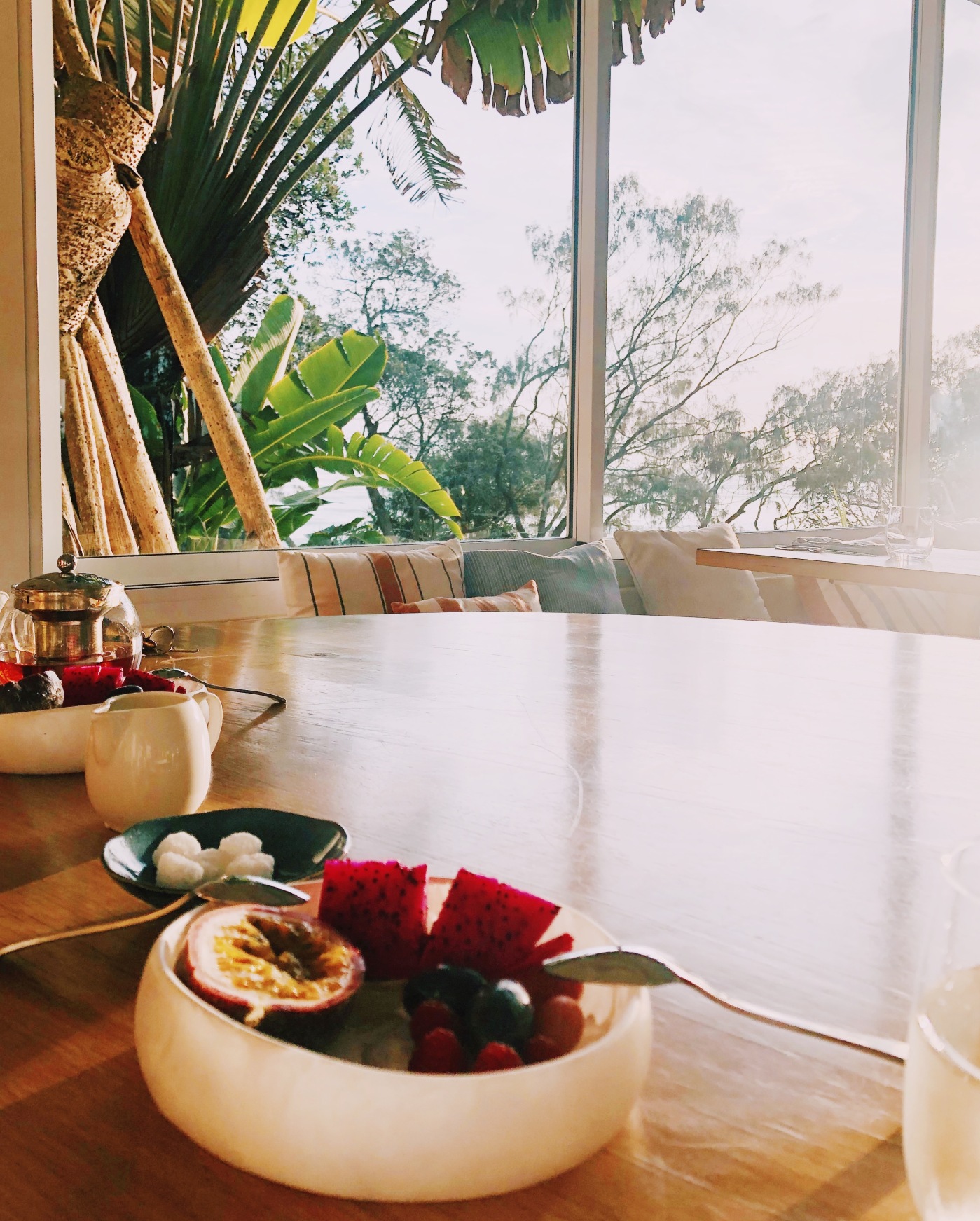 And the breakfast! Each morning, after (reluctantly) leaving our little slice of heaven, we would head down to our kickstarter for the day – beetroot & ginger shots that quite literally blew our heads right off! Important to note, we are pretty tame on the spirits these days so this just about does it for us. How times have changed. Not to mention all the turmeric almond lattes, the soy chais and the oat milk short macchiato.

Now, things were going pretty smoothly but we’ve been around the block long enough to know every shoot has its curveball. And big curveball it did. Our super fab photographer, Armelle, was rushed to the Byron Bay emergency department during our 2nd day of shooting, in incredible abdominal pain. Despite recommendations of going into surgery right away, Armelle, the absolute trooper she is, insisted on working through the pain to finish the campaign. On our return to Melbourne, Armelle was rushed straight into surgery and we all decided she is most definitely a warrior and should audition for the next season of Survivor.

With Armelle in hospital, we had to give ourselves a crash course in Capture One! 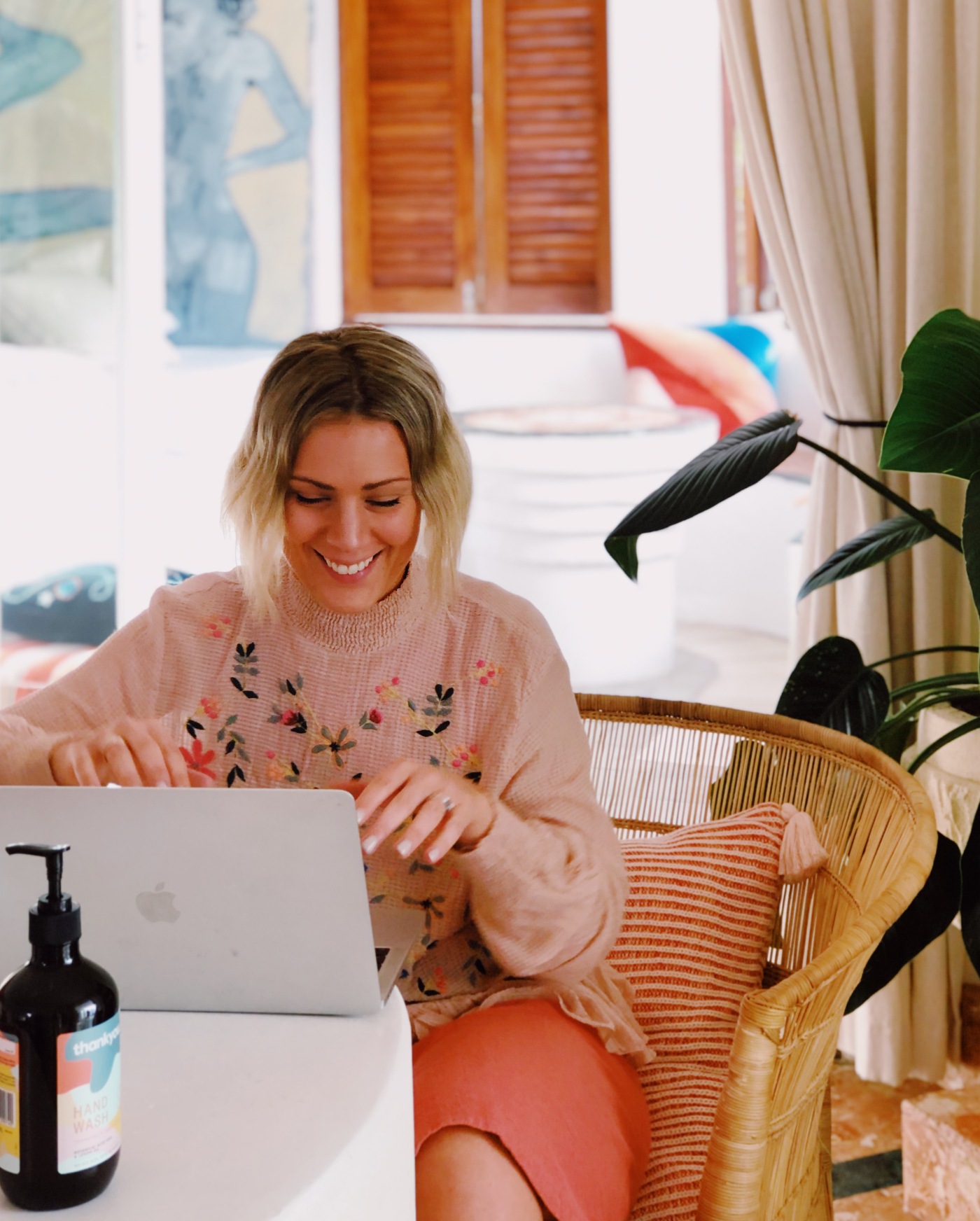 It’s not ALL play for Al on shoot, still got business to attend to! 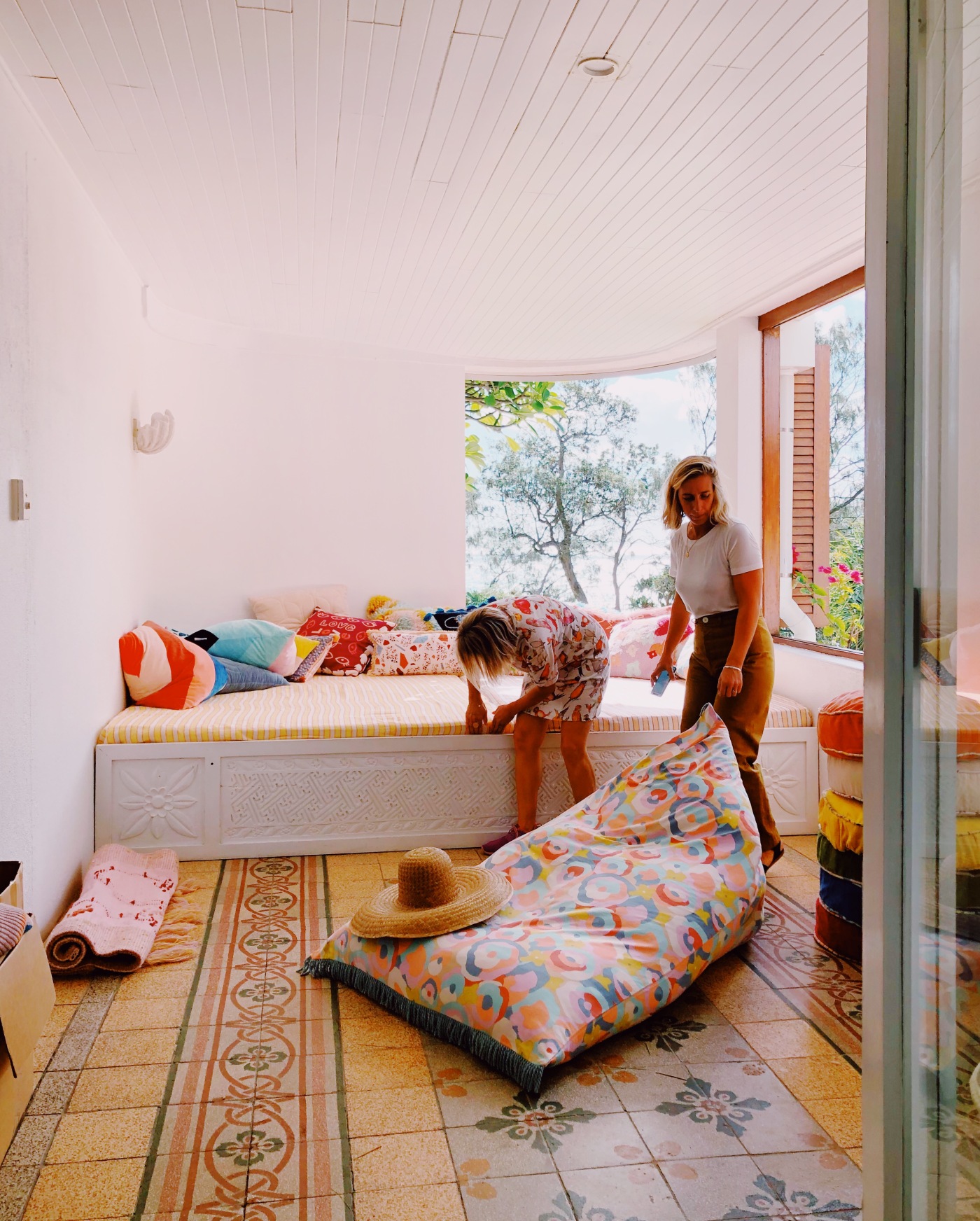 Gorgeous little Sunday on set for our Kids & Baby shoot!

On our last day we shot the PLAY by Sage x Clare collection! The dream team behind Airstream Social found a perfect home for our Airstream shoot, right up close to the beach front. But what Byron shoot is complete without a Kombi? And just as we looked to the heavens to answer our prayers, we saw a Kombi van in the distance, waved the driver down and PLEADED (ok hijacked) him to park next to us for the shoot! We also cheekily pinched someone’s surf board to pop up on top of the Kombi. We were really tryin’ to capture those true Byron vibes!

Armelle shooting our PLAY by Sage x Clare collection in the silver bullet Airstream! (Not as easy as it looks, thats for sure)

We had gale force winds threatening and black clouds rolling in but we did it! All of us crammed into an Airstream proving hilariously challenging – sort of similar to that awesome board game Twister. And just as we captured our final shot, the Airstream Social hosts magically turned it into a bar for a mini wrap party. We ran around like crazy people, partly b’cos we’d just achieved something so freakin huge and also b’cos lack of sleep does funny things to a bunch of already kooky peeps. Cushions were thrown into the air, Jules plastered herself to the back of the airstream vowing to never get off and we took a whole bunch of videos which we may or may not share at some point, if we’re brave enough.

There you have it… the back story, the real story, the actual behind the scenes story. Hope you love it xx 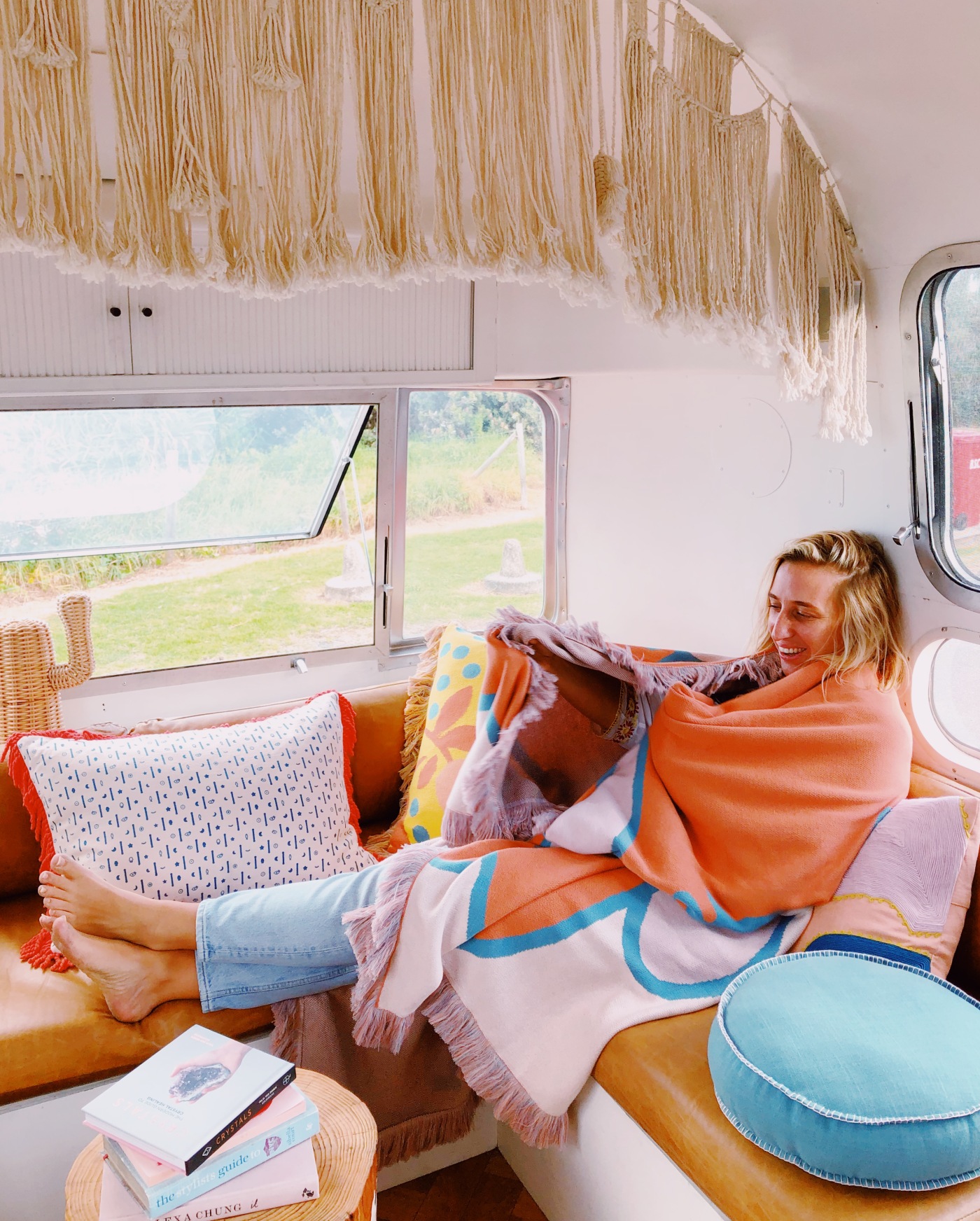 Noël getting’ nice and comfy in our new throw!

Thanks to Raes on Wategos and The Airstream Social for their amazing hospitality and locations.